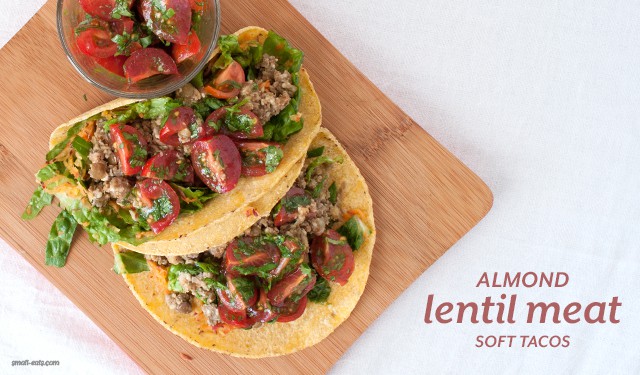 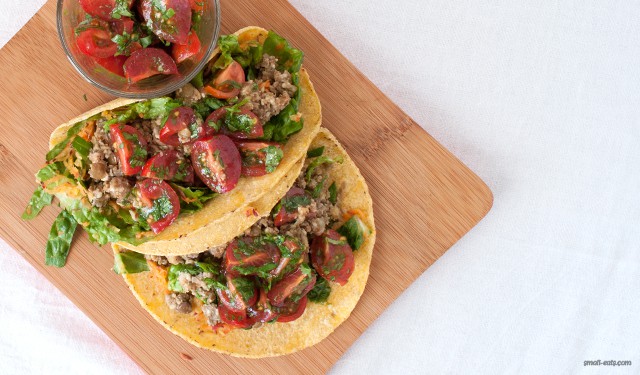 Less can be so much more. For the past few years, I’ve been cutting down on a lot of things. I’ve curbed the amount of stuff I buy, the number of impulse purchases at Target (a tricky challenge, for sure. How do they have everything?!), overly processed or refined foods, the insane load of television I used to watch, and the portion sizes on my plate.

Some of cut back was for health reasons and some was for sanity reasons. I feel so much lighter with less stuff. It’s less stuff to see and potentially get stressed about, and it’s less to clean! I recently stumbled on Minimalism and found a lot of things clicking. Minimalism isn’t just an art or architecture style, but a mindset and lifestyle. Minimalism, like most dietary worlds, is broad, with some people living with a set number or objects and others just striving for less without a number.

Most of the people I had found addressed minimalism in terms of their wardrobe or possessions, but you can also apply it to the kitchen as well. Courtney Carver, of Be More with Lessp and Project 333 launched The Capsule Kitchen Challenge. Every three months you choose 33 ingredients (including drinks) and make meals only with those ingredients. Flavor enhancers, like spices, oils, and condiments don’t have a limit, but I bet if you look through your pantry and fridge there are some things that you could clear out for the things you really use.

It can sound a bit limiting, but it’s also a bit freeing. Once you know what’s in season and what ingredients you like, you can just stick with those things. Your meal planning shopping becomes so much easier and you’d be surprised how many great things you can make with 33 ingredients.

Courtney shared her list here, and I was excited by the challenge of figuring out what to make with the ingredients she listed. It’s almost like Chopped or Iron Chef, but with way less pressure.

After looking at her list, I decided to make some vegetarian tacos with a nut meat similar to the one I made over the summer, but with lentils and almonds as the stars. I added a lettuce and carrot slaw to add more vegetables and give it a little crunch. 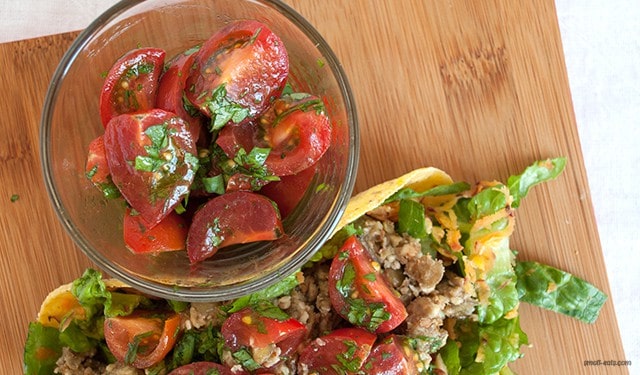 While I was testing this recipe, I realized the slaw and taco meat wasn’t quite enough. It needed something else to keep it moist. The next time I made it, I topped it with some cherry tomatoes that had been tossed in a bit of olive oil and cilantro and that tied everything together. If you have salsa, you could easily do that too.

If you’re feeling a bit overwhelmed by the stuff in your kitchen or what to make for dinner (it happens to all of us, trust me), try out Courtney’s Capsule Kitchen Challenge and embrace your less.

I am not receiving any compensation for this post. I truly believe in the benefits of minimalism and want to share fun and new ways to think about living, cooking, and eating.

In a small pot, combine uncooked lentils, garlic cloves, a pinch of salt, and 1 1/2 cup of water. Bring to a boil, then reduce to a simmer and cook for 20-25 minutes, until lentils are soft.

While the lentils are cooking, combine the lettuce leaves, grated carrots, and lemon juice into a bowl. In a different bowl, combine the quartered cherry tomatoes, cilantro, and olive oil.

IIn a food processor, add almonds and run on high until they're a coarse meal. Make sure you don't overprocess the mixture into a flour.

When the lentils are done, drain and transfer the lentils (and garlic too!) into the food processor. Add a bit of salt and chili powder. Run the food processor until the lentil and almond mixture almost resembles a chunky dip. If it's a bit dry, add a few teaspoons of water. The drier this mixture is the harder it is to keep in the taco! Adjust seasonings if needed. Transfer to a serving bowl.

Warm up your tortillas in a wrapped paper towel in the microwave for 30 seconds to a minute (more time for more tortillas. If you're warming up 2, start with 30 seconds). Assemble tacos and enjoy.