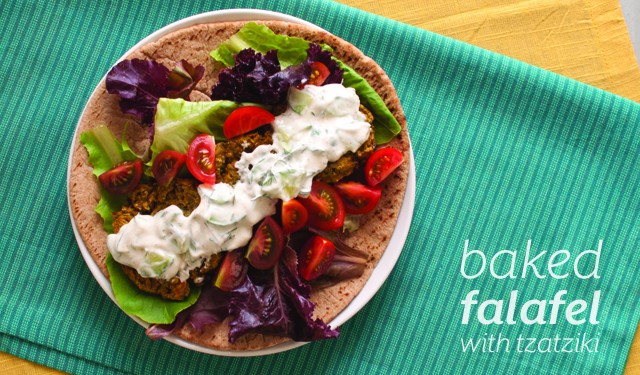 You are here: Home / All Year / Baked Falafel with Tzatziki
4 shares

I’m not crazy about strict diets. Deprivation leads to intense cravings, and then you’re driving to the grocery store in your pajamas at 2am because you can’t stop thinking about chocolate. I air on the side of moderation, which is why Mark Bittman’s latest book, VB6: Eat Vegan Before 6:00.

Though I’m not jumping at the bit to be vegan (I love cheese. And charcuterie plates. And an occasional bacon wrapped date.), but Bittman’s idea of eating as much greens and unprocessed foods during the day and having meat or non-vegan meals at dinner doesn’t sound like a bad idea. You can never have too many veggies!

One of Bittman’s recipes stood out to me. Bittman’s baked falafel was originally a lunch recipe, but I added the tzatziki sauce (because I love tzatziki) which makes it a dinner recipe, if you decide to follow Bittman’s lifestyle. I’ve never had baked falafel, and I love the idea of making an unhealthy recipe healthy.

If you’re interested in learning more about Vegan Before Six, get Mark Bittman’s book here.

Preheat the oven to 375°F. Rough cut carrots and pulse in food processor until smaller. Add chickpeas, garlic, onion, cumin, cayenne, herb, 1 teaspoon of salt, pepper, baking soda, and lemon juice. Pulse until everything is mixed but not mush.

Line a large baking sheet with two layers of parchment paper. Roll the bean mixture into balls slightly larger than ping pong balls, then flatten them into patties. Brush the tops with the olive oil. Bake 10-15 minutes on each side, applying olive to the other side after flipping.

While the falafel is baking, quarter the cucumber and chop into small slices. Combine the cucumber, yogurt, dill, cumin, paprika, salt and pepper.

Serve the falafel on whole wheat pitas with lettuce and tomatoes and top with tzatziki like I did, or just place the falafel directly on a bed of lettuce with other vegetables.