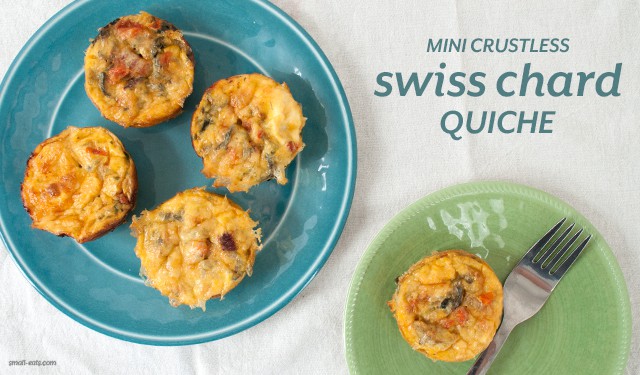 Making this recipe for you helped me out tremendously in such an unexpected way.

I made these mini quiches to share another idea with you on what to do with Swiss chard. Veggie quiches are a favorite, but since I had already shared a quiche recipe that offered a lot of variations and possibility, I needed to change it up. I made some itty bitty quiches with a mini muffin tin a few months ago and wanted to work out the muffin tin quiche approach a bit more.

What started out as a fun recipe and a challenge to myself turned out to be a saving grace. Things have been busy in the small eats universe and it’s mixed up my schedule. To get things done well, I’ve shifted from working out in the mornings to going into work earlier to maximize my brain power.

This shift lead to a new question: What I can eat for breakfast that’s good for me and quick? On the mornings I workout, I have a protein shake afterwards that keeps me full for several hours. The protein shake I use is formulated to be used post-workout, so that was out for now. My other standby was going to take too long, and I refused to turn to buying a breakfast every morning at a coffee shop or from the vending machine.

And then I realized that I had made those mini quiches, just chilling in the fridge. Those little pucks were packed with the veggies and protein I needed and they just needed to be heated up and they were ready to go! The stress of figuring out what to healthful thing eat for breakfast and get out the door quickly was gone for the week. All because I made something to share with you.

This recipe is part of a series called Nutrition DL. Nutrition DL gives you the download on seasonal fruits, vegetables, or pantry staples. Once you learn about the basics of the featured ingredient, I share a four recipes over four weeks to inspire and feed you with this great seasonal food. Check out other foods I’ve covered here.

Preheat oven to 350. Pour olive oil onto a folded paper towel and rub the cups of your muffin tin.

On your cutting board, fold a chard leaf in a half lengthwise. Carefully cut the stem off of the leaves and put into one bowl and put the now two leaves into another. Repeat with all of your leaves.

Go through your chard stems and discard any broken or overly damaged stems. I usually keep 6-8 stems to use in my recipes. Cut off and discard the top, narrow parts of the stem and rough edges at the bottom, about a quarter to half-inch in. Chop chard stems and place back in bowl.

In a medium mixing bowl, whisk together the eggs and almond milk. Add the chard mixture to the bowl and stir to combine. With a small ladle or ice cream scoop, portion the egg mixture into the oiled muffin tin.

Top with shredded cheddar cheese in the amount of your choice (you can skip this step if you don't like/eat cheese). I probably used a little less than tablespoon for each quiche.

Bake for 25-30 minutes, until golden brown. Once done, allow to cool. Run a small spatula or knife around the edge to release it from the pan.