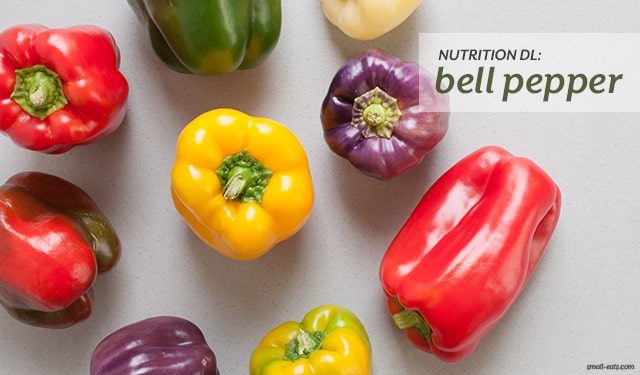 Late summer is here, and the stalls of my farmers’ market are overflowing with beautiful bell peppers of all different shapes, sizes and colors. With the bounty of bell peppers this time of year, I thought it would be perfect to choose them to feature in the latest installment of Nutrition DL.

Bell peppers are low in calories and contain zero fat. They’re also very low on the Glycemic Index, meaning eating bell peppers won’t cause a spike in blood sugars and lead to an energy crash. Bell peppers are also just as tasty raw as they are cooked, so bell peppers can be a great option for healthy snacking.

Similar to the tomato, which I covered in an earlier Nutrition DL, bell peppers get their intense colors from carotenoids. In fact, tomatoes and bell peppers are the only vegetables that have a majority of 8 major carotenoid nutrients!

As a refresher, carotenoids are organic pigments that have a variety of benefits. Some act as antioxidants and help fight out free radicals that can damage cells. Other carotenoids help prevent macular degeneration.

To maximize the amount of carotenoids in your peppers, try and eat the ripest bell peppers as possible. Didn’t think bell peppers were sold unripened? Neither did I! All bell peppers start out green and then ripen into the yellows, oranges, reds, and even purples we see in the grocery store or farmer’s market. So if you’re leaning towards getting more nutritional bang for you buck, buy a more colorful pepper. If you have some time, you can ripen a green pepper in a brown paper bag with a banana, much like you can ripen avocados.

Unlike other peppers, bell peppers don’t have a lot of capsaicin, the phytonutrient that gives peppers their heat. Besides causing some mild pain, capsaicin is used as a topical pain reliever and may prevent prostate cancer.

Even though bell peppers are light on capsaicin, they still have a lot of nutritionally awesome things going for it. Bell peppers are an excellent source of vitamin C and has 64% more of your daily value than oranges! When you cook bell peppers, you will loose some vitamin C, but since their daily value is already so off the charts, it’s not something I worry about. 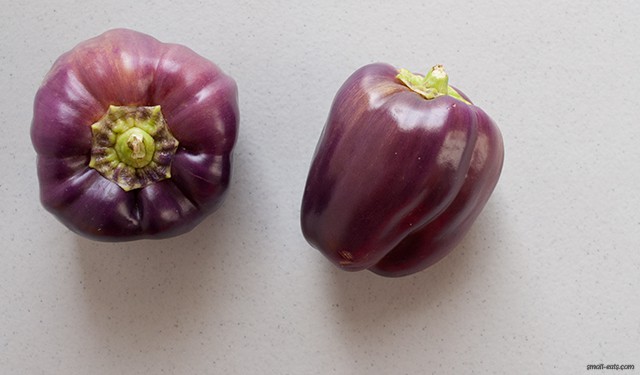 Kinds of Bell Peppers
As I said earlier, all bell peppers start out green and ripen into bright yellows, reds, and oranges. There also some varieties that are white, purple, and chocolate brown. I’ve mostly come across those varieties at farmer’s markets rather than grocery stores.

Bell peppers’ colors also indicate their level of sweetness. Green bell peppers are more on the mild tasting side, while red or orange bell peppers are sweeter. Reds, because they’re the most ripe, are the sweetest of them all.

We’re most familiar with the round, squat, apple-like shape of conventional bell peppers, but bell peppers can also be more elongated or smaller and almost chili pepper looking. 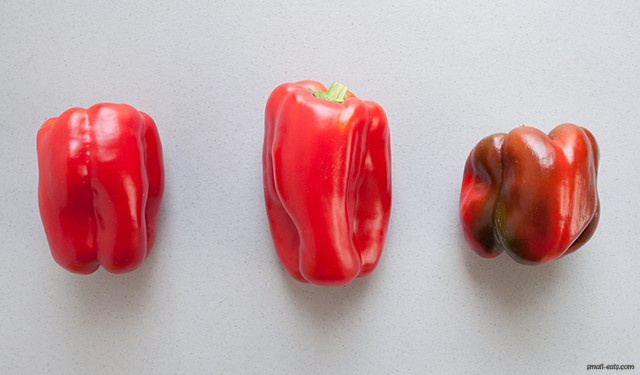 Buying and Storing Bell Peppers
Choose firm bell peppers with a smooth, unblemished skin. Avoid wrinkly-looking peppers. Sometimes I hold the peppers up to my ear and shake them. If you hear rattling, that means the core has detached from the inside and you should pass on that pepper. If you’re shopping with maximum nutrition in mind, go for the red bell peppers.

Because of their thin skins, bell peppers are high on the Environmental Working Group’s Dirty Dozen list. I strongly recommend buying organic or no pesticide, no spray bell peppers.

You can store whole bell peppers in the crisper drawer of your refrigerator for about a week. If they’re getting really soft or wrinkly, it’s time for the compost bin or the trash.

Tomorrow I’ll be back with a recipe to start us off on our bell pepper adventure. Are there any bell pepper recipes you’d like to see or see made healthier? Let me know in the comments below.

Interested in seeing what other foods I’ve covered in this series? Read up on them here. 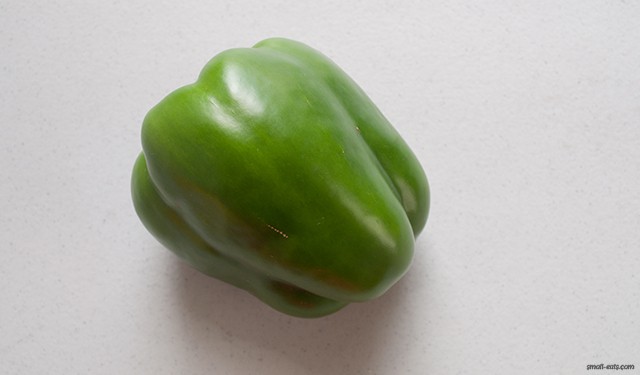