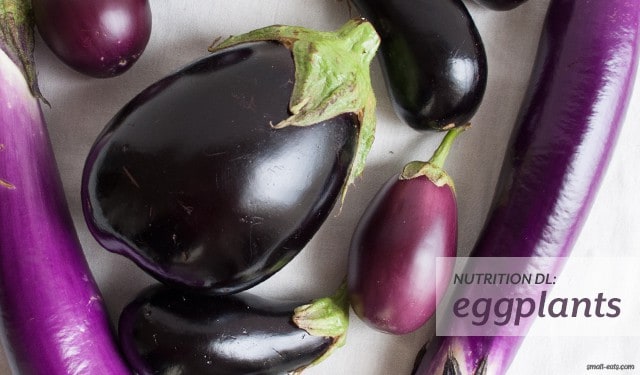 Like tomatoes, eggplants have taken over the farmer’s market and grocery store this season. A great meat substitute and grilling vegetable, eggplants aren’t just for pasta dishes! For the next few weeks I’ll be featuring some recipes that highlight this nutrient-packed, calorie-light fruit (yes, it’s a fruit!).

Benefits
If you’re watching what you eat, reach for an eggplant. Cooked eggplant only has 35 calories per cup and no fat, making it a perfect option for your next healthy meal. They’re also extremely low in sodium, so they’re also a great option for people with low-sodium diets.

A cup of cooked eggplant had 10% of your recommended fiber intake, which is good for regulating your body functions. This also means that you can feature eggplant as a main component of your meal and feel full afterwards.

Eggplants are a great addition to a low-glycemic diet, meaning it won’t cause any high spikes in blood sugar. Eggplants are also good sources of B vitamins, folate, manganese, and potassium, providing 50-75% of your recommended daily value.

Though it may get a little papery when roasted, don’t toss the beautiful eggplant skin. Within the skin is a phytonutrient called nasunin, an antioxidant that protects cell membranes from damage. 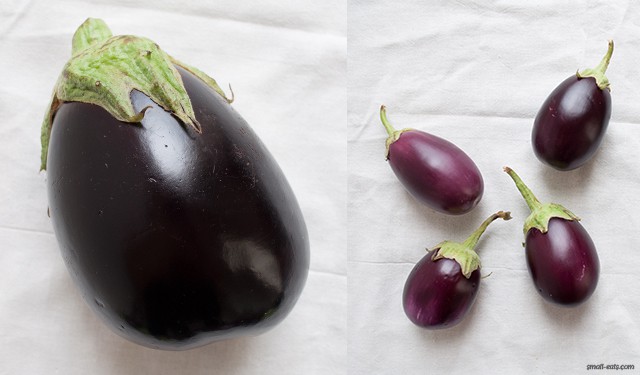 Kinds of Eggplants
Like our last Nutrition DL ingredient, eggplants come in a plethora of shapes, sizes, and colors.

Though they all have unique names, you’ll usually see varieties named by their region or country of origin. American varieties are usually that deep, inky purple you’ve grown up recognizing as eggplants. They’re usually hefty and oval shaped. One extremely common American variety in the globe eggplant.

Italian eggplants look similar to their American friends, but they’re usually smaller than the Americans (there’s a joke in there, you can find it 😉 ). Some Italian eggplants are streaked with white.

Thai eggplants are a beautiful milky green and look almost like tiny green tomatoes. They’re more on the bitter side, and can stand up to hot chile and curries. Indian eggplants are also on the small side like their Thai neighbors, but are purple and less bitter. 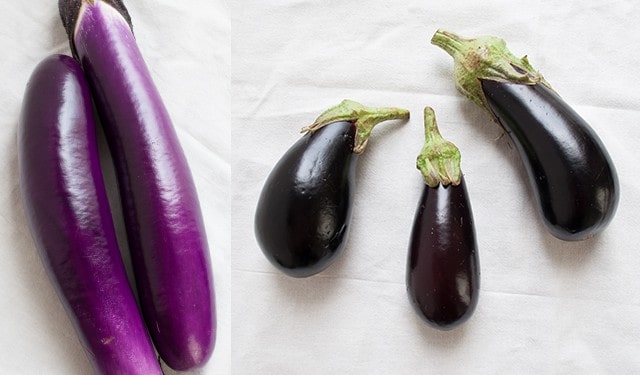 When you’re looking for eggplants, choose ones with a smooth, undaunted skin. Check for any soft spots and make sure that the eggplant overall is firm.

Eggplants are a member of the Clean Fifteen, which means that it’s safe to buy non-organic, conventionally-grown varieties of eggplant.

Eggplants can be stored in the fridge in the crisper drawer for about a week.