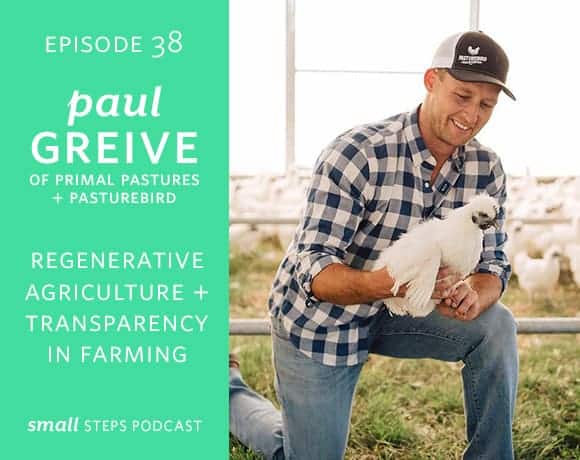 We’ve all seen the videos and documentaries about the many issues of factory farming and how it affects the animals, humans who produce them and the environment. While some people choose to stop eating meat as a way to reduce harm, there are many ways we can opt into another system that treats animals, the humans that raise them and the environment in a way that not only supports, but gives back to the land. In this episode I talk with farmer Paul Grieve of Primal Pastures and Pasturebird about what that looks like and how his farms lead with transparency first.

You can also listen in your favorite app: iTunes | Google Play | Spotify

About Paul Grieve
After changing the way he was eating to deal with chronic pain, Paul Greive discovered the higher priced meat he was buying for himself and his family wasn’t actually the quality it promised. Frustrated by the industry, he and his family joked about getting chickens, and five minutes later, his brother-in-law bought 50 chicks for the backyard, and Primal Pastures began.
Primal Pastures is a family-run farm that has expanded from just pastured chicken to include other birds, grass fed lamb and beef, all raised in a way that supports animals and the land in a humane and regenerative way.
Soon after, Primal Pastures’ sister company, Pasturebird, began, with the focus of providing a more affordable pastured chicken to restaurants, grocery and butcher shops and online retailers.

Small Steps in the Show: