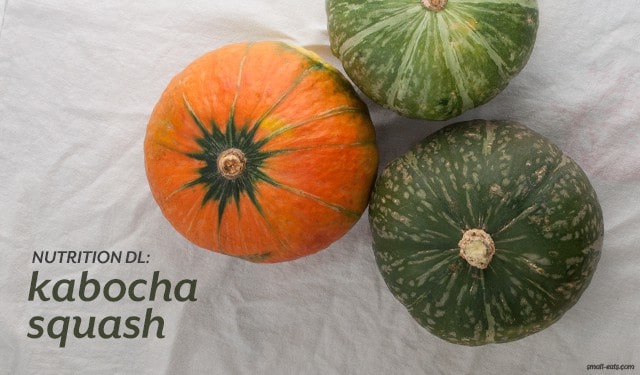 Fall marks the return of winter squashes. All summer we’ve been enjoying delicate summer squashes, but now it’s time for their heartier counterparts to take the stage.

Last winter I discovered kabocha squash (thanks to my lovely friend and Japanese food ambassador, A) and was really intrigued by it. Kabocha (not to be confused with kombucha) is an Asian variety of winter squash and is common in Japanese, Thai, and Korean cuisines.

This squash has a slightly dry, nutty, and sweet taste. Once cooked, it’s skin is soft enough to eat. I have made kabocha before here but haven’t really explored it much. So what better than to make it the focus of the latest Nutrition DL. I have seen so many different ways to cook this squash, and I can’t wait to share them with you.

Benefits
Kabocha is slightly lower in carbs than the more ubiquitous butternut squash, so if you’re watching your carbohydrate intake, try switching the two squashes out in your meals.

Kabocha’s golden flesh is thanks to high amounts beta-carotene. As I’ve mentioned before, our bodies convert beta-carotene into vitamin A. Vitamin A is essential for our immunity, eye, skin and cell health.

In addition to vitamin A, kabocha is a good source of vitamin C and fiber. It’s also low on the glycemic index, which is key for people looking to keep their blood sugar in check. To get even more fiber, eat the skin too. 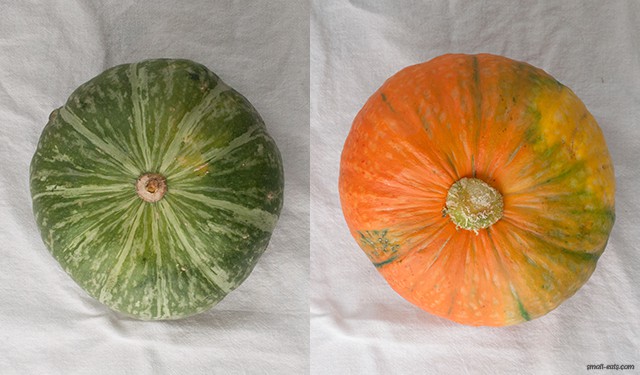 Kinds of Kabocha Squash
There are two type of kabocha squash. The most common variety is the green squash with flecks or streaks of light green. The second is red kabocha squash that looks more red-orange that pure red. While both are sweeter than other winter squashes, the red variety is a little sweeter.

If you can get your hands on a red kabocha squash (they seem slightly less common in my area), I would suggest that variety for any breads, pancakes, or sweeter dishes you plan to make.

Buying and Storing Kabocha Squash
In the United States, kabocha is grown mostly in California, Florida, and parts of Colorado. Because I live in one of those kabocha-growing states, I’m able to find it at my local farmer’s market. If you can’t find it in a farmer’s market, look to your natural grocery store (I have also found it at Sprouts) and definitely a Japanese or other Asian grocery store. When you look for it at an Asian grocery store, you’ll most likely see it sold in halves or quarters. Some sell a mixture of pre-cut and whole squashes, but it all depends on that particular grocery store. 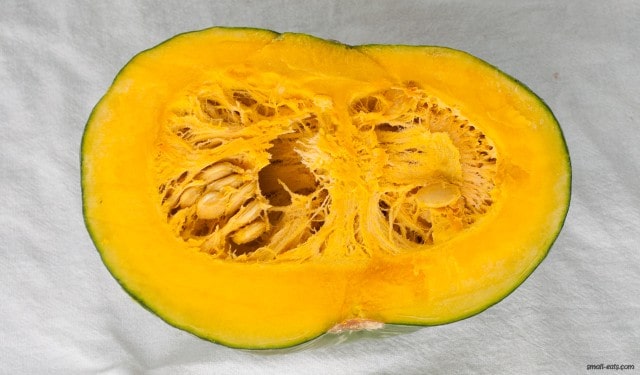 Winter squashes are in the middle of the EWG’s produce pesticide guide, meaning it’s affected by and absorbs pesticides, but not as much as the produce at the top of the list. Since kabocha is one of the squashes that have a skin soft enough to eat when cooked, I would recommend airing on the cautious side and buying an organic or no-pesticide/no-spray kabocha.

When you’re picking out which squash is your squash, go for a scratch and dent-free one. Make sure it’s firm to the touch and is heavy.

Like other winter squashes, you can store in on your counter or in your pantry until you’re ready to cook with it. If you buy the pre-cut squash from the Asian grocery store, keep that in the fridge and use it in two to three days tops.

Check back tomorrow for a kabocha squash recipe. Is there a fall fruit or vegetable you’d like to see covered in this series? Let me know on Twitter or email me at hello (at) small-eats.com.

Interested in seeing what other foods I’ve covered in this series? Read up on them here.