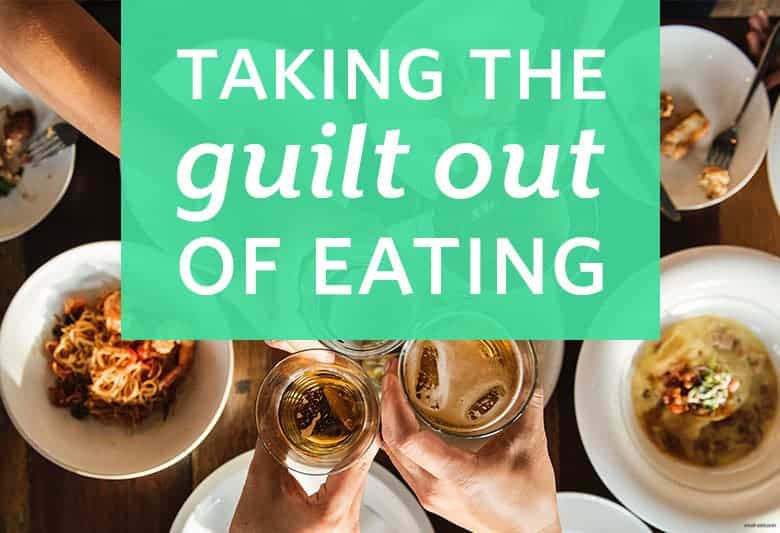 You are here: Home / Nutrition / Taking the Guilt Out of Eating
1 shares

Around the holidays, parties or gatherings, in addition to great feelings of spending time with people you care about, a lot of guilt around what you’re eating or drinking can come up. That guilt can throw a big wrench in having a good time while you’re there and can open up a pit of guilt the next day.

That next day guilt could lead to you punishing yourself in some way, whether that’s with a longer and harder work out to “make up” for those calories, not eating much, or drowning yourself in negative self talk.

Or, you’re so distracted by making the “wrong” food or drink choices/amount you spend the whole night worrying and fixating on your food and missing out on the actual fun to be had with people you care about.

There could be times in your life where you’re choosing to be more careful with what you’re eating or drinking for specific health reasons or you’re eating a specific therapeutic diet to help heal certain things. You could also have certain food allergies or intolerances that might require planning ahead, bringing your own snacks, or being a little more vigilant about the food you choose to eat.

For most of us, that’s not the majority of our lives.

So, how do we carry on eating wherever with less, and eventually no guilt?

Let’s first look at where that guilt comes from.

That guilt can come from societal expectations and a very narrow view of what is accepted as healthy. That view is usually driven by outward appearances and thinness.

So when we eat “fattening,” “unhealthy,” “junky” or “bad” foods or drinks, we could stray from thinness, or the things we’ve been doing to get closer to thinness. We’re “messing up” in the eyes of some bullshit standard that may not even be what you want. Or what your body is physically capable of.

While there is food can make us feel physically bad, and there are foods that could lead to health issues, that doesn’t mean foods themselves are bad, or that if you eat them ever, that you’re bad.

Your worthiness and value never changes, and it certainly doesn’t change if you eat a freaking cookie.

Now that you’re aware of WHY the guilt is there, try to notice what it feels like in your body or what it sounds like in your head. Maybe it feels a certain way, says certain things, or maybe even sounds like someone (maybe there’s one person that made a lot of appearance comments when you were growing up or put a lot of judgement on food).

When you hear or feel that, label it and acknowledge it. You can say “Okay, this is that guilt voice,” or “This is that guilty feeling.” By labeling it, even if it’s just a thought in your head, you’re able to give yourself some separation and eventually step out of the guilt spiral your mind gets caught in.

Acknowledging it can look like a few things. You can say to yourself:

You can notice it at any time, even if you feel like the voices or feelings are louder than you’ve caught them at other times. It’s also important to label them and realize that this is an older, engrained response in you. It’s not going to disappear overnight, and may not ever disappear.

And that’s okay. Having these thoughts and patterns is very normal, and doesn’t need to be another reason to beat yourself up. They may never go away, but as you start to notice those voices more, the volume on those voices could start to go down.

Make Your Own Choices

After you notice the guilt and label it, remember that you do not need to listen it. You don’t need to be driven by the guilt. You are fully capable and can make your own choices. You get to decide what you eat, what you drink, and how much you have of either.

A panicky feeling could come up too, a worry that you can’t trust yourself. That’s also guilt and societal standards trying to mess with you again. No one knows your body like you know your body. And if you don’t know it as well, the only way you’re going to get to know it is by listening and trying things out. You can trust you’ll find what works for you and your body.

Be Okay with the Choices You Make

It will take some practice of making choices that feel counter to that guilt voice, and it could feel uncomfortable at first. That’s okay. Think of this as a new muscle you’re building. When you start working out a muscle, it can feel hard and sore the next day. And as you continue to work out that muscle, it gets easier with the weight you’re using and isn’t as sore the next day.

Some of the choices you make may not work out– you could physically feel bad from what you ate or drank, get some indigestion, a rash or acne flare-up, or feel like you’re dragging the day after. You do NOT have to beat yourself up for making the “wrong” choice. That choice you made was just one of the hundreds of thousands of choices you will continue to make in your life.

You can view what happened as a result of that choice as feedback, as information on what works and doesn’t work for your body. What can be helpful is to remember how that choice turned out and not repeat that in the future.

On the flipside, some choices you make that could feel opposite of what the guilt tells you could work out just fine. Eating that dessert or having that drink could be just fine. You could notice that after eating or drinking that one thing and not buying into that guilt voice, that the rest of the time at the event/gathering could feel lighter. You could enjoy yourself and get to connect with other people more because you’re not so fixated on what you’re eating.

The more you can be okay with your choices and remember that you have a lot more choices in the future, the easier it can be to move through guilt. Also recognizing that you can’t change the choices you’ve made in the past, just how you deal with it right now can be helpful too.

Taking the guilt out of eating, especially if that’s a loud voice in your head or feeling in your body, will take some time and practice. And that’s okay. You can do it, and you can turn down the volume on those feelings and feel more confident in your choices, especially those that “defy” what the guilty voice is telling you. You can make choices that work for you and your body, thinness be damned.