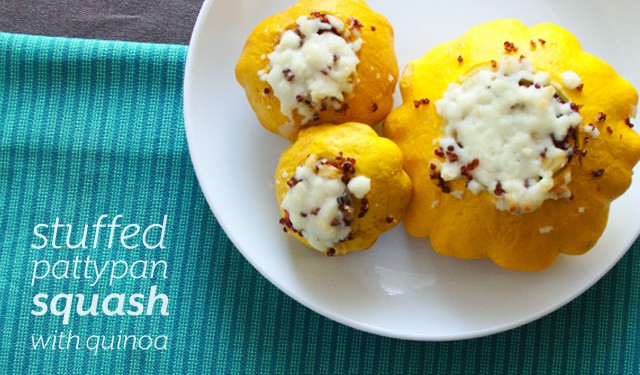 Life has a way of making things interesting. When I started working on today’s post, I had a completely different recipe in mind. I made it, tasted it, liked it, but not enough to share with all of you. It wasn’t quite there yet, and I want to spend more time developing it and making it perfect.

So, I shifted gears and decide to feature what I had already planned to make for dinner tonight, which is stuffed pattypan squash with quinoa. I had some small pattypan squash in my CSA box waiting to be used, and I found some larger ones at the farmer’s market. Stuffing some squash would be enough for me and N, right? Sure.

Wrong! I had bought too few squash and more filling then squash. The little pattypans that I gotten from my CSA box were better as appetizers or sides rather than the dinner I had planned. When I was growing up, there was a segment on Bill Nye the Science Guy called “Did You Know That…?” And it always ended with “Now you know.” Yes, now I very much know.

Preheat oven to 350 degrees. Line a baking sheet with foil.

Slice off the stem on the pattypan. Take a melon baller, measuring spoon, or small spoon (depending on the size of your squash) and scoop out the insides, much like you would a pumpkin at Halloween. Keep 1/2 cup of squash insides and discard the rest and the seeds. Place the pattypan squash on the baking sheet.

Heat oil in a pan over medium-high heat. Add onion and garlic and cook until softened. Stir in cumin and oregano and cook for about a minute. Add reserved squash insides, tomato, and corn and saute. Then stir in water, quinoa, chipotle pepper, and adobo sauce . Continue to cook on medium-high heat until most of the liquid has evaporated. Remove from heat and add salt and pepper to taste.

Put filling inside the squash and top with queso fresco. Bake for 20 minutes or until squash is tender.

Adapted from Oh My Veggies