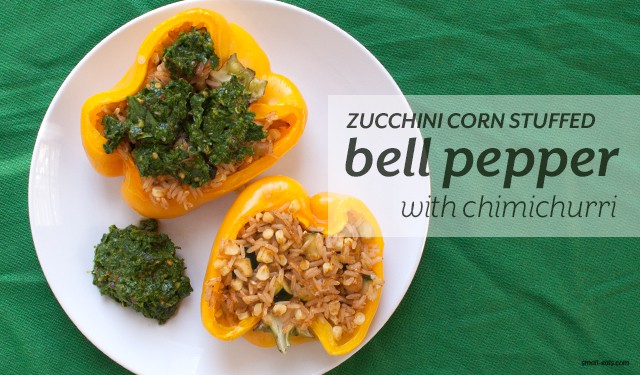 After looking at other recipes, I decided to halve my bell peppers rather than keeping it whole. It cut down on the oven time, and the pepper’s going to get cut down in order for you to eat the pepper and the filling at the same time, so why not?

To add more color and flavor, I made a chimichurri to top the pepper with instead of cheese. While I don’t have a problem with quality cheese (I kinda love cheese. A lot.), it can be a gateway food in my house. Have extra cheese leftover from the recipe? Let’s buy some crackers to go with it. Hungry for a snack? Cheese and crackers instead of fruit or nuts. Let’s buy some bread to make grilled cheese sandwiches to use up the cheese… So, for those reasons, I don’t use cheese a lot. We’ve all got our gateway foods, and cheese is certainly one of mine. But, back to the chimichurri. It adds a bright, peppery kick to the filling and ups the green count, which is a win win. I top the peppers with chimichurri after baking, rather than before.

This recipe also shares a fast and lightbulb technique to cooking corn on the cob that I learned from the incomparable Elise Bauer, the powerhouse behind Simply Recipes. It will change the way fellow small tables think about cooking corn. If you want the visuals that accompany this technique, read Elise’s post here. Thank you, Elise!

Preheat oven to 375. Line a 13x9 baking dish in foil and place your pepper halves in the dish.

Place corn (still in husks, with any exposed corn silks removed) into the microwave and cook for 8 minutes (four minutes per cob if you're making more). Once corn is done, carefully remove and allow corn to cool on a cutting board. Cut the end, including about 1/2" off of the cob, with your knife. Then peel off the husk and silk like a banana. Cut the corn off of the cob.

In a saute pan, heat a tablespoon of olive oil to medium high. Once hot, add garlic and zucchini and cook until zucchini has softened a bit, about 5-10 minutes. Add in corn and rice and season with paprika, cumin, and salt. Adjust seasonings to your taste.

Spoon the filling into the peppers and bake for 25-30 minutes.

While the peppers are baking, combine the herbs, garlic, pepper flakes, vinegar, cumin, and salt into a food processor. While the processor is running, pour the olive oil in. Stop running the food processor and scrape the sides down to ensure everything gets processed. If you want a smoother chimichurri, add more olive oil. Adjust seasonings to your taste.

To serve, top peppers with chimichurri and enjoy.